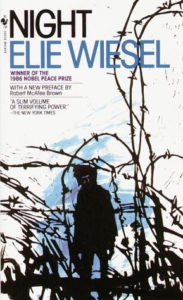 The recent death of Nobel Prize winner and Holocaust survivor Elie Wiesel at age 87 presents an opportunity for us to study and reflect upon the brutal genocide that killed six million Jews in the 1930s and 40s.

Wiesel, who lost his father, mother and a sister in the Holocaust, managed to survive the Auschwitz and Buchenwald death camps. After the war he moved to the United States, and at the age of 27 wrote his internationally acclaimed memoir Night.

The activist and author made Holocaust education his mission in life and became a voice for victims, eventually writing more than 50 books. His death leaves a huge void.

U.S. President Barack Obama called Wiesel “one of the great moral voices of our time, and in many ways, the conscience of the world.”

“By bearing witness, he revealed evil many avoided facing,” wrote Samantha Power, U.S. ambassador to the United Nations. “By never giving up, he made this world better.”

I have created a collection of resources about Wiesel’s book Night, and urge teachers and parents to use these in explaining why Wiesel’s death still reverberates so strongly throughout the world today.