Objectives The Big Bang is the generally accepted theory for the origin of the universe among astronomers and cosmologists. It is amazing to think that the entire universe originated from one ‘singularity’ at some point many years ago. It is still just a theory, however, and is not proven as fact. 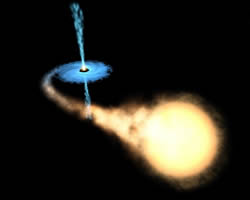 Conception drawing of a binary star system
with a black hole and a main sequence star.

Some problems exist with the mathematics and physics involved with the theory of the Big Bang. Many of them are very complex and beyond this text, but some can be mentioned here:

Baryon Asymmetry: According to the general laws of physics there should be equal amounts of matter and anti-matter within the universe. Anti-matter is like regular matter, but opposite. For example, the opposite particle to an electron is the positron. It has the same mass, but it has a positive charge while the electron has a negative charge. Whenever the two meet they annihilate each other, releasing large amounts of energy according to Einstein’s famous equation, E=mc2. Remarkably, anti-matter is in fact used everyday in laboratories around the world.

Baryon particles are a family of sub-atomic particles, which are well known by physicists. If the theory of the Big Bang is going to completely match the general laws of physics, there should be equal numbers of baryons and anti-baryons. This, however, is not observed. There does not seem to be enough anti-baryons in the universe to make the mathematics of the Big Bang theory work nicely.

Dark Matter: In observing the movements of galaxies, it was noticed that there does not seem to be enough mass to cause the gravitational effects that seem to be occurring, particularly in the rotation of the galaxy. Where was this missing mass? This led to the idea that there may be some “invisible” mass that is causing the effects we see, and it was given the name dark matter.

The astonishing thing is that according to the calculations of the Big Bang theory and the galaxies observed, there must be about 90% dark matter in the universe and 10% regular matter, the stuff we see and feel everyday. The analysis of what we see seems to support the idea of dark matter quite well, but there has been no direct evidence yet that dark matter actually exists.

Dark Energy: As mentioned in Module 9, Tutorial 1 (and one of the major issues with the Big Bang theory), galaxies are not just moving away from the initial explosion, but they are actually accelerating away from each other. If they are accelerating then there must be some force that is pushing them.

Big Bang calculations actually require there to be an additional 70% energy somewhere in the universe. Scientists don’t know where the missing energy could be, but it could also be related to dark matter. Currently, the idea that dark energy is the missing energy and is causing the acceleration force of the galaxies is a possible theory, but there is still no observed evidence for this. 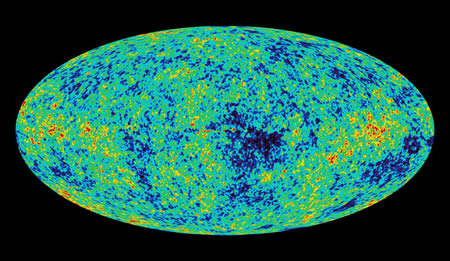 Did you know?
Anti-matter really exists and it is powerful! For many years Star Trek has been describing how their engines are fueled by matter and anti-matter. Although the starships are not real, the theory for energy production is plausible. Scientists have been studying anti-matter for many years with labs dedicated to using positrons to investigate the inner structure of different materials. CERN labs are the most regular producers of antiprotons, but they still are only capable of producing very little, cumulatively less than a millionth of a gram so far.

Alternatives to the Big Bang Theory
There are many observations that support the theory of the Big Bang. One of the most important is the explanation of the cosmic background radiation (see Module 9, Tutorial 2). But there are still many people who think we need to consider alternative theories until there is more proof that the Big Bang is indeed the truth. Here are a few of the possibilities scientists have come up with:

Tired – Light Theory
One of the more difficult concepts to explain within the universe is the idea that galaxies are accelerating away from us in all directions. The Tired-Light theory offers an explanation to this. This theory states that the universe is in a steady state and not actually expanding, and therefore there was never a need for a Big Bang.

The red shift in the light we see from other galaxies, however, seems to indicate expansion. The theory states that light actually loses some of its energy while crossing the great expanse of space. By the time it reaches us from the distant galaxies, it is shifted to a lower energy state, which would match the red shift. The galaxies would only appear to be moving, when in fact they are stationary.

This theory is given little credence, as there is no evidence that light would slow down over distances. This would also require a break in current laws of physics. While this is still possible, the existence of the cosmic background radiation is not explained at all with this theory.

This theory ends with equal numbers of matter galaxies and antimatter galaxies, which is not what we see around us. Also, there would be have to be borders between these galaxies where matter and antimatter would be coming in contact with each other, annihilating and releasing large amounts of energy. This is also not observed.

Variable Gravitation
The gravitational constant (a factor in how strong gravitational reactions are), which Sir Isaac Newton is famous for noticing and attributing a constant value to, has a strange similarity to the Hubble constant (a factor in relating the red shift of a galaxy and its actual distance). However, the Hubble constant has been found to vary depending on the era within the universe. It has been suggested that the force of gravity may also vary accordingly over time, and we are just seeing it as constant because it changes so little over our lifetimes.

If this is true, then the whole structure of our solar system and galaxies would have much different histories than previously thought. Unfortunately, measurements of particular star systems, which provide the necessary tests to prove this theory, seem to indicate this is not plausible.