IN COLLECTION
Objectives
We have learned in Unit 9 Lesson 1 that the nature of the universe is anything but simple. Observing is one thing – explaining what is seen can be altogether different. 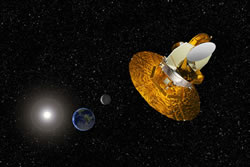 
Though there are several theories as to how the universe began and has since evolved, one theory is widely accepted by astronomers: the Big Bang theory. The Big Bang theory states that at one point in the past (now estimated to be 13.7 billion years ago), all the material which currently makes up the universe was exploded outward from a single point. At the time of initial explosion, the universe was extremely hot, and very dense. Matter and energy were indistinct. This initial state of high density and temperature is known as a singularity.


Did You Know ? The name of the Big Bang theory came about by accident! Dr. Fred Hoyle, a British astronomer and defender of competing ideas on the origin of the universe, was making fun of the theory during a radio interview for the BBC. He referred to it sarcastically as “this big bang idea…” and the name stuck!


According to the Big Bang theory, the timeline of the universe is then divided into three sections. The first, the very early universe, is still poorly understood. There are no experiments on Earth which can test the conditions which existed at this point in time, so the theory remains speculative. It is thought that during this time, which lasted much less than one second, the four forces we know today (gravity, electromagnetism, strong and weak nuclear forces) were all initially one force, and broke apart during this epoch.

An expansion of gigantic proportions, called inflation, occurred as well during this time. Inflation served to flatten the universe and spread radiation (matter/energy) out in all directions, and only lasted a very short time. However, this expansion may have been the beginning of structure in the universe as we know it. Finally, the initial creation of matter arose during this time, known as baryogenesis. During baryogenesis, the amount of matter and antimatter became unbalanced, allowing for more matter than antimatter to exist. If the matter and antimatter had remained balanced, the particles would have annihilated each other. Matter would not have been created, and you would not be here reading this!

In the second epoch, the early universe, the universe continued to expand, but at a much slower rate than during inflation. As the universe expanded, it began to cool, and matter and energy began to de-couple. For the first 300,000 years, photons dominated the universe, interacting with newly-formed protons and electrons. It was also during this time that the initial elements were formed; the early universe was composed of 75% hydrogen, 25% helium and trace amounts of lithium, the first three elements on the periodic table. Small structure began to form, based on gravitational interactions with the new particles.


The final stage of universe evolution began at about 300,000 years after the Big Bang and is continuing today. Structure formation began on small scales. It is thought that quasars formed first – very early, very bright, active galaxies with little structure. Stars and galaxies formed next, eventually evolving into galaxy clusters and superclusters. The larger stars produced elements heavier than hydrogen, helium and lithium which previously existed, and the evolution continues to this day. 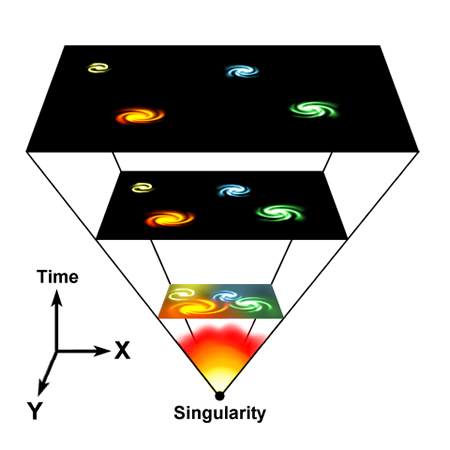 According to the Big Bang theory of universe evolution, a large explosion resulting from
a singularity caused a massive expansion, eventually leading to structure in the universe
as we see it today.

Did You Know ? For every billion antiparticles which existed before baryogenesis, there were a billion-plus-one normal particles. This means that for every 1 billion annihilations of particles and antiparticles, one particle survived. That may not sound like a lot, but those one-in-a-billion particles are what currently make up all matter in the universe!


It may sound far-fetched, but the majority of the developments in this theory are supported – and in some cases initiated – by actual observations made in the past century. the most notable of these observations being the current expansion of the universe. What caused all of the galaxies to be moving further and further away from each other? An initial explosion and subsequent inflationary period could have caused this, as modeled in the Big Bang theory.

There exists another “ubiquitous” observation that supports this theory. During baryogenesis, radiation freely streamed throughout the entire universe (which was smaller at the time). This radiation continues to stream through space to this day, but does so at a much lower temperature, due to the expansion and cooling of the universe. In 1964, remnants of this radiation were discovered at a temperature of 2.7K – only 2.3K shy of a predicted value of 5K! Since then, the radiation has been mapped in all directions away from the Earth, using both ground and space-based observatories. It has been found to have nearly the same temperature in all directions, consistent with radiation that would have existed shortly after the Big Bang, and with the estimated rate of expansion of the universe.

Canadian Contributions Astronomers from the University of Toronto and the Canadian Institute for Theoretical Astrophysics (CITA) contributed to the science behind BOOMERanG: a balloon observation station which flew above Antarctica and measured the cosmic microwave background radiation. Its goal was to measure differences in the temperature of the microwave background, in an effort to determine what the universe was like at the end of the early universe period.


The Big Bang also correctly predicts the percentage of early elements found in the universe, as well as the distribution and structure of galaxies and galaxy clusters. There are, however, some aspects of the nature of the universe which the Big Bang does not model very well, and these will be discussed in the following Module. 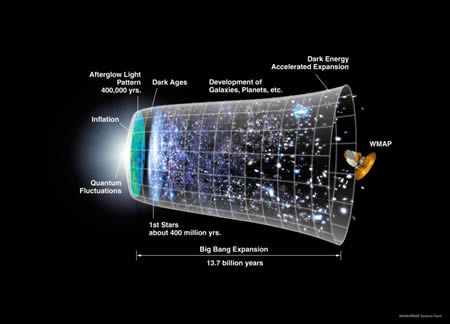 Representation of the expansion of the universe, the inflationary epoch
represented by the dramatic expansion.