Unit 9 - Lesson 1: The Nature of the Universe

Reviews - Unit 9 - Lesson 1: The Nature of the Universe

The article is very well compiled and informative and presented in wonderful way.

Information - Unit 9 - Lesson 1: The Nature of the Universe

IN COLLECTION
Objectives Cosmology is a branch of astronomy which addresses some of the burning questions in nearly every astronomer’s mind: Where did the universe come from? What is beyond the edge of the universe (if there is an edge)? What will become of the universe in the future? 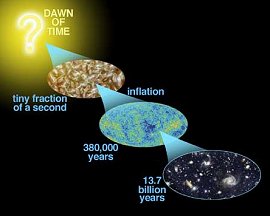 Needless to say, these are not simple questions with simple answers. Instead, our knowledge of the universe as we know it has come from decades of observation and analysis, and even then, is still just speculation based on sporadic evidence. In spite of this, it is a very exciting topic, and recent advancements in technology have placed astronomers a few steps closer to being able to answer those fundamental questions.

Before we address how the universe came to be, it is sensible to discuss the structure of the universe. We now know that the universe is composed of hundreds of millions of “island universes,” today called galaxies (see Module 8, Tutorial 1). When looking away from Earth, these galaxies are found in every direction, spread rather evenly. The distances to the galaxies closest to the Milky Way were first measured by Hubble in the 1920s by examining features those galaxies had in common with the Milky Way, such as Cepheid variable stars.

Cepheids pulsate regularly, expanding and brightening before shrinking and dimming over a set time interval. The longer the period of the bright-dim cycle, the brighter the star. When Cepheids are observed in distant galaxies (which they can be, due to their extreme brightness), and their period is determined, astronomers can figure out how bright the star should be, and then determine the distance to the star based on how bright the star is observed to be. 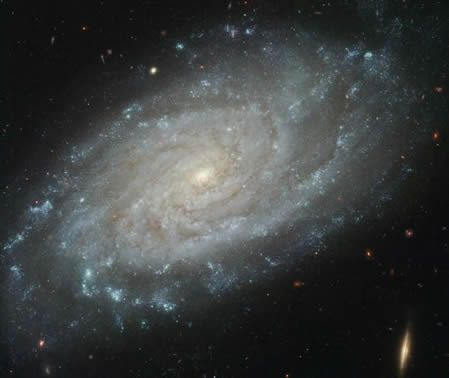 Galaxy NGC 3370, as seen in this image taken by the Hubble Space Telescope, is home
to several Cepheid variable stars. By measuring how long a Cepheid takes to pulsate, the
distance to the star (and hence, the galaxy), can be calculated. NGC 3370 is approximately
100 million light years from the Milky Way.

Try This!
This activity is best done with the lights out. Obtain an ordinary flashlight, stand 1 metre from a wall, and shine the light on the wall. Slowly move backwards, keeping the light shining on the wall. The further you get from the wall, the dimmer the circle of light, even though the brightness of the flashlight is not changing. The same is true for stars. Stars have an absolute magnitude (their intrinsic brightness), which is like the brightness of the bulb, and an apparent magnitude, or how bright they appear to be.

Using similar concepts, distances can be measured to galaxies based on their brightness. From these observations, it was determined that the furthest objects are at least 10-100 million light years away from us, giving astronomers an initial idea as to the size of the universe. As the limits of telescopes are pushed, and images of greater and greater detail are being created, the distances can be measured to galaxies even further away than this!

When an ambulance or police car zooms by you with its sirens blaring, an interesting effect occurs – the sound of the siren changes from a high pitch as the vehicle is coming toward you, to a slightly lower pitch as the vehicle moves away from you. Technically speaking, as the source of a sound wave moves toward you, the sound wave gets “squished,” creating a higher-pitched sound. As the source moves away, the sound wave becomes lengthened, producing a lower pitch. 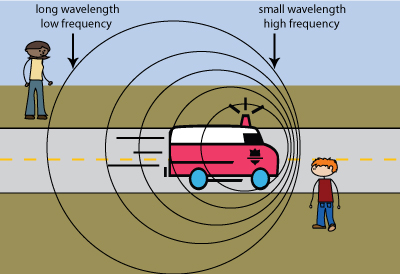 Since light behaves like a wave, it makes sense that a light moving toward or away from an observer would have slightly squished or elongated waves – and indeed it does! However, this doesn’t work on small scales; you cannot see any effects when a friend runs toward you with a flashlight. But when a light source is moving away from us or toward us at very high speeds, the effects are noticeable.

In Unit 3, Lesson 1, we saw that white light is actually composed of a spectrum of colours. The red and orange colours had a lower frequency than the blue and violet colours. When an light source is moving toward us, the squished light waves appear a little more blue (the higher frequency). When the source is moving away from us, the elongated light waves appear a little more red. This observation is called blue shift, or red shift (depending on the direction the object is moving).

Light moving toward us becomes blue shifted, while light moving away from us becomes
red shifted. The faster the object is moving, the more red/blue it will be.

Observing red and blue shifted light has enabled us to conclude that spiral galaxies are indeed spinning, as one side of the galaxy’s light will be blue shifted toward us, while the other side will be red shifted away from us – indicating a galactic rotation. Looking at the centres of galaxies, however, has shown us that nearly every single galaxy is moving away from us. In addition, the further away a galaxy is relative to the Milky Way, the faster it is receding from us. This has given us another way of measuring distances: if we can measure how fast the galaxy is moving away from us, based on previous velocity-distance correlations, we can predict its distance.

More recent estimates of the distance from Earth to the furthest object are between 10 and 15 billion light years. Since there has been no discovery of objects further than this, astronomers know that the age of the universe must be between 10 and 15 billion years…otherwise, the light emitted from these very distant galaxies would not have had time to reach us. Using further refinements, the accepted age of the universe is estimated to be 13.7 billion years. When we look far into space to see objects 13 billion light years away, we are seeing them as they were 13 billion years ago. These galaxies might be long gone by now, but instead we are treated to a glimpse into what the very early universe was like.

The concept of galaxies moving away from the Milky Way raises yet more complex issues – why are the galaxies moving apart from each other, and what does this mean for the universe? What space are they moving into? Will they continue moving forever? The question of why the galaxies might be moving apart will be addressed in the next tutorial, but we can discuss the possible outcomes of this expansion here.

First is the possibility that the universe might keep expanding forever, but that gravitational forces between all the galaxies would gradually slow down its rate of expansion, but never actually stop it. Should this occur, everything in the universe would be equally distributed but further separated from each other, and the overall temperature would become too low to sustain life.

A second outcome has the universe expanding, gradually slowing in its rate of expansion as in the first case, but this time, the universe stops expanding and maintains its size. In this scenario, the mass contained in the universe is sufficient that gravity will stop the expansion of the universe at some point.

A third theory states that the universe has enough mass and gravity to gradually slow its expansion, stop momentarily, and then begin contracting as the gravity pulls everything together again. This scenario has a finite time scale, whereas the first two are infinite – there is no set end point. As the universe contracts back on itself, there must come a time when everything collapses and the universe as we know it ends.

Very recent observations have indicated the possibility of a fourth scenario for the fate of the universe. It also has an infinite existence, but in this case, the universe’s expansion is accelerating, instead of slowing down. This theory, which seems to be supported by new research, puzzles astronomers, as this indicates that a force must be pushing the galaxies away from each other, causing them to speed up. There is currently no known force that repels on such a large scale. This still hypothetical force has recently been dubbed dark energy.

Did You Know?
There are actually a few galaxies moving toward the Milky Way! Our galaxy is part of a group of about thirty galaxies collectively called the Local Group. The Milky Way and the Andromeda galaxies are the most massive galaxies within the group, gravitationally pulling the rest of the smaller galaxies toward them, creating a blue shift in their light.


Canadian Contributions
Dr. Richard Bond is an award-winning, world-renowned Canadian cosmologist at the University of Toronto, the same university he attended as an undergraduate. His work focuses on determining the densities of ordinary matter in the universe, as well as dark matter and now dark energy. He was a founding member of the Canadian Institute for Theoretical Astrophysics (CITA) and was recently awarded the NSERC Herzberg Medal for his sustained excellence and influence in research, having substantially advanced the field of study.

Learn More!
Cosmology is one of the most fascinating branches of astronomy, as it addresses all of the “big questions.” Since this set of modules and tutorials are intended as an introduction to these topics, you are encouraged to continue your reading by perusing some Internet sites. Perform a search for “fate of the universe” or “age of the universe” using your favourite search engine for more information.