IN COLLECTION
Objectives
The night sky has always invited humans to gaze up into the darkness and open up their imagination. While viewing hundreds of points of light, mysterious planets moving amongst the stars and satellites passing quickly by. However, there is another classification of celestial bodies, which has captured the imaginations of amateur and professional astronomers alike, primarily due to the fact that they are so hard to see. This includes star-forming nebulae, nebulae that are remains of ancient stellar explosions, star clusters and galaxies. Collectively, they are called deep-sky objects. 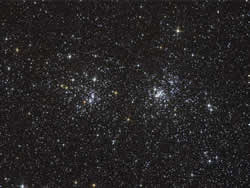 
Deep-sky objects offer astronomers much more interesting views than stars. Whereas stars are primarily tiny discs of light, with limited colours, deep-sky objects have much more contour, shape and colour. All of the beautiful astronomical photographs we see on calendars and on television come from deep-sky objects.

While galaxies are perhaps the most rewarding of deep-sky objects, they are also some of the most challenging due to their extreme distance from the Earth. Light arriving at Earth from a distant galaxy has traveled millions of light years to reach us, so in a sense we are looking back in time millions of years. Particularly distant galaxies are also moving away from the Milky Way, and this can be seen by examining the ancient light from galaxies. This gives us one way to describe the nature of the universe as a whole, and is discussed in more detail in Unit 9.

The challenge lies in finding dark enough skies from which to observe, and in being able to collect enough light to observe details, such as spiral structure. To do this, the largest of telescopes are constructed atop mountains, above the clouds, where there is next to no light pollution and weather is rarely a factor (see Unit 3, Lesson 3). Amateur astronomers must exercise both diligence and patience while observing in order to view galaxies using smaller telescope and less-then-ideal conditions. There is more information on how to observe deep-sky objects in Unit 10, Lesson 3.

The Cigar Galaxy (so-named for its shape) is one of the more popular galactic targets for
amateur astronomers. The lanes of dust seen in this image, however, are very hard to see with
all but the largest of telescopes.

Deep-sky objects fall into two catalogues which are used throughout the world by both amateur and professional astronomers to reference galaxies. The Messier Catalogue was created by Charles Messier (1730-1817), an astronomer who was also an avid comet-hunter. While scanning the skies for comets, Messier kept a record of “fuzzy objects” which were not comets, specifically so he and others would not confuse them with comets during future observations.

These objects were discovered much later to be galaxies, clusters and nebulae. His list of objects – 110 of them – are designated by the letter M. M31 is the Andromeda galaxy discussed in Module 8, Tutorial 1, while the Cigar Galaxy pictured above is M82. Because Messier observed from France, the Messier Objects are only found in the northern hemisphere.

The NGC is the New General Catalogue of over 8,000 deep-sky objects, located throughout both hemispheres of the sky. This catalogue was compiled much later, in the late 19th century. While more thorough, amateur astronomers tend to prefer the Messier Catalogue as its objects offer a tangible observing goal.


Did you know? Only the most dedicated of amateur astronomers have undertaken the observing task called a “Messier Marathon.” This means the astronomer must try and find all 110 Messier objects within a single night. It requires skill with his telescope, knowledge of the skies and dedication to perform this single night accomplishment. Also, it is only possible to perform this feat a few times a year due to the tilt of the Earth and the changes in the visible part of the night sky.