IN COLLECTION
Objectives When it was discovered in 1923 that there existed galaxies other than the Milky Way (see Unit 8, Lesson 1), astronomers turned their telescopes in earnest to the fuzzy “island universes” in order to determine their structure and distance from our galaxy. What they discovered was not only the spiral galactic structure of the nearby Andromeda galaxy, but other structures in other galaxies. It turns out there are quite a few! 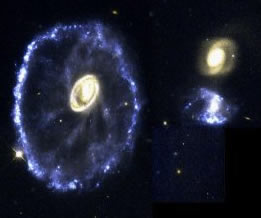 
It was Edwin Hubble (of recent Hubble Space Telescope fame) who made the initial measurement of the distance to the Andromeda Galaxy. It was also Hubble, three years later, who proposed that galaxies be separated into three main categories, based on their appearance. This method of classification is now known as the Hubble Sequence.

Spiral galaxies have a central bulge and a flat disk of stars forming arms. They are also spinning, creating a spiral, pinwheel pattern seen in the arms. The Andromeda galaxy is an example of a spiral, as is the Milky Way. Spiral galaxies are further broken down into barred spirals or normal spirals – the former have slightly elongated bulges, while the latter have more spherical bulges.

Elliptical galaxies have very little structure compared to the bulge and arms of spiral galaxies. They are oval in shape, and the stars move in random patterns within them. They are classified further by their ellipticity – how flattened the oval is. An elliptical galaxy classified as E0 is nearly spherical, E7 would be quite flattened, and with E3 would be somewhere in between.

The final classification of galaxy is the catch-all for any galaxy which doesn’t fit into the first two categories: Irregular galaxies. Irregulars have no set shape or organizational structure, and have a huge range in size. 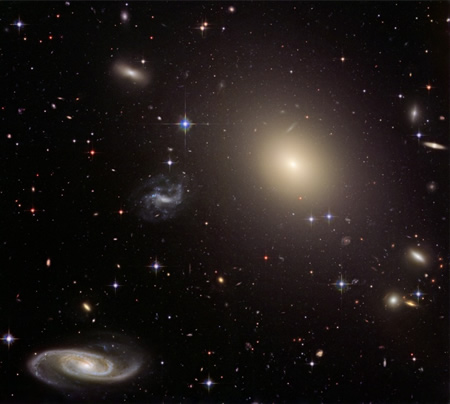 Like stars, galaxies are sometimes found clustered together. In this particular cluster, a large
elliptical galaxy is found near the centre of the image, surrounded by dozens of other galaxies.
The only objects in this image which are not galaxies are foreground stars (with cross-hair-like
spikes). How many spirals, ellipticals and irregulars can you find?

Did You Know ? The Milky Way galaxy, and its closest neighbour, the Andromeda galaxy, are on a collision course with each other! This collision between these two spiral galaxies will likely occur in about 3 billion years, and the resulting galaxy is expected to be an elliptical.


Hubble originally laid out his classification in the form of a tuning-fork diagram. He initially thought that his diagram represented a sort of galactic evolution i.e., that all galaxies started off as spherical ellipticals, slowly flattened into an E7, eventually becoming a spiral galaxy and finally dissipating into an irregular shape. He believed that in locating different classifications of galaxies in the night sky, one was seeing galaxies in various stages of evolution. This theory turned out being incorrect, but was an important first step in separating galaxies into different classifications.

Canadian Contributions Sidney van den Burgh, a Canadian astronomer, made a significant modification to Hubble’s classification scheme. Dr. van den Burgh introduced a method of further classifying spiral galaxies based on the definition of the spiral arms observed. His research included further study of galaxy morphology, and he showed that Hubble’s classification applies only to young galaxies. He has served as President of the Canadian Astronomical Society, and has won numerous medals and awards. For 6 years he served as Vice-President of the International Astronomical Union.


Millions of galaxies arescattered throughout the universe. Instead of all living side-by-side in a universal subdivision, most galaxies are found in densely-packed clusters, themselves each with thousands of galaxies. Famous examples include the Coma cluster and Hercules cluster. Within these clusters are found galaxies of each of the three types, all in motion based on the gravitational interactions with their galactic neighbours. It stands to reason that so much mass (recall that each galaxy contains hundreds of billions of stars) is bound to tug and pull on all of the surrounding mass. The result is that often galaxies will “collide” – run into each other and disrupt the existing structure (spiral or otherwise).

When galaxies do collide, interesting gravitational effects occur. Because there is a large amount of space between stars within a galaxy, the chance of a star colliding with another – even while the galaxies are colliding – is quite small. Instead, the stars pull and tug at each other gravitationally, destroying the structure of the galaxies. What is left at the end of the collision – which could take hundreds of millions of years in total – is a large collection of stars, gravitationally bound, but exhibiting no structure; essentially, it is an elliptical. In fact it is now thought, contrary to Hubble’s initial theory of galaxy evolution, that elliptical galaxies may be formed by the interactions of spiral galaxies.

Galactic evolution is perhaps one of the most interesting areas of theoretical astronomy today. Since collisions happen on such large time scales, it is nearly impossible to observe the ongoing effects of two galaxies colliding. 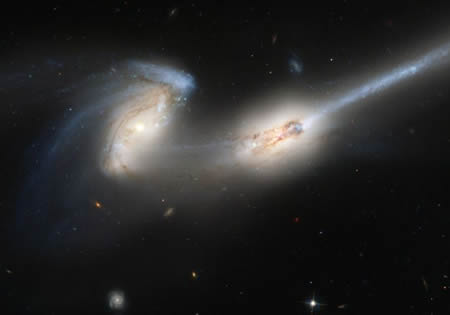 A pair of spiral galaxies commonly referred to as “The Mice” are currently in the process
of colliding. It is thought that the two galaxies have already passed through each other
– which is why we can see some disruption in structure – but that they will continue to
interact with each other until they form a single galaxy.

Canadian Contributions Professor John Dubinski, of the Department of Astronomy and Astrophysics at the University of Toronto, and the Canadian Institute for Theoretical Astrophysics (CITA), is one of the world’s leading researchers on galactic formation and dynamics. He was an amateur astronomer in his teens before completing degrees in Physics and Astronomy from the University of Waterloo and the University of Toronto. He has pioneered work using parallel supercomputers, which has recently allowed for simulations of models using billions of particles, similar to the most complex galaxies. His work on the collision and evolution of galaxies is referenced by astronomers around the world.