We have spoken in detail of the star closest to the Earth (Unit 6), and of its surrounding system of planets (Unit 2). However, when we look into the night sky, we see hundreds or thousands of stars that make up an even larger system of stars, planets, black holes, dust and gas: a galaxy. 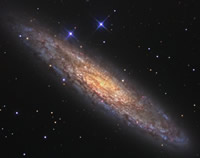 
It was originally thought that everything observed in the night sky was simply a part of the local universe, and that the universe itself was a flattened, football-shaped system with the majority of the stars in the centre. Since stars were the only celestial bodies that could be seen, star counts were used to estimate the shape and nature of the universe. But this raised a problem of sorts – if there were a large number of stars in any given direction, the night sky should be much brighter! Over time, astronomers realized that their universe also contained gas and dust, with the ability to block some of the starlight.


It wasn’t until the mid-1800s that it was suggested that there might be, beyond the edges of our “universe” and obscured by gas and dust, distant, similar systems. These faraway systems were nicknamed island universes. This idea, along with the fact that astronomers using telescopes of greater and greater magnification were observing spiral structure in previously-seen fuzzy nebulae, led to many debates about the true nature of the universe: did these fuzzy nebulae exist within the our “universe,” or were they examples of island universes?


In 1923, the distance was measured to one of the brightest of these fuzzy, spiral nebulae (what we now call the Andromeda Galaxy), and it was shown to be outside the limits of our “universe.” Since then, hundreds of external systems have been discovered, and are now called galaxies: groups of hundreds of billions of stars, forming a unit within the larger, seemingly infinite, universe. 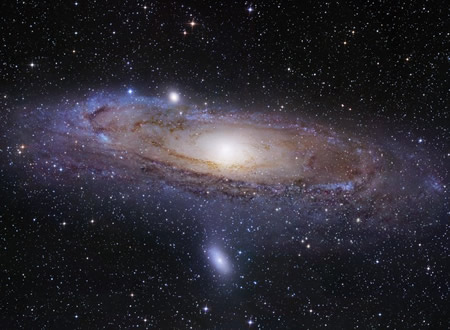 The Andromeda Galaxy was the first “island universe.” In the early 1920s, it was discovered
to be located outside the boundaries of our “local universe.” Today, it is recognized that
there are millions of other galaxies located throughoutthe entire universe.

Even before recognition it as system of stars among a great many others, ancient astronomers recognized our galaxy as the continuous band of light seen across the sky on a dark night. In fact, the word galaxy comes from the Greek word for milk (“gala”), as the stream of stars reminded the Greeks of flowing milk. The name they gave this celestial sight – via galactica – literally translates as the Milky Way, giving us the name of our own galaxy.

A digitally-enhanced image shows the detail of the Milky Way galaxy
as seen over the Kofa mountains in Arizona.

Canadian Contributions
The Ojibwe call the Milky Way the “Bird’s Path,” as they noted that birds travel in the same direction across the sky as the Milky Way when they migrate. The Cree saw the Milky Way as the “Spirit Road,” the path along which the soul of a recently deceased person dances, to reach the place of eternal happiness. The Inuit called the Milky Way “Aviguti” – the Divider.

Since the early 1920s and the huge paradigm shift at that time, great strides have been made in understanding the Milky Way. However, there is one significant problem with how we try to figure out the nature of our galaxy; we can only make observations on it from the inside. While it would be wonderful to take an external picture of our galaxy to see what it looks like, the distances involved make this completely unfeasible, and astronomers must instead be content with piecing together a picture of the Milky Way from the inside out.


The Milky Way is a spiral galaxy (for more information on galaxy shapes, see Unit 8, Lesson 2), containing a disk of over 400 billion stars that rotate around the centre, similar to the motion of our solar system. Our Sun – one of these 400 billion – is located about a third of the distance from the centre to the edge. The total width of the Milky Way galaxy, from one edge to another, is just over 163 000 light years – light emitted from a star at one side of the galaxy could take up to 163 000 years to reach the other side!

The Milky Way is composed of several parts. The disk (divided into thin, thick and extreme sections) is a region of current star formation and young stars. It is relatively flat (much like the plane of the solar system) and extends out from the central bulge to the edges of the galaxy. The central bulge is a region of older stars, found densely packed together around the centre of the galaxy. Unlike the disk, the bulge is not flattened. Instead it is more spherical.

Finally, the plane of the galaxy is surrounded by a large sphere known as the halo. Within the halo are sparsely-spaced old stars and spherical collections of stars known as globular clusters. No new stars are being formed in this region.

Did you know?
Very little is known about the bulge, as interstellar dust blocks visible and ultraviolet light from reaching the Earth. Radio telescopes (see Unit 3, Lesson 3) reveal an intensely compact source of radio waves, which may be due to a supermassive black hole! With a distance of 26 000 light years from the Earth to the centre of the galaxy, however, humans won’t be visiting that area any time soon to verify these predictions. 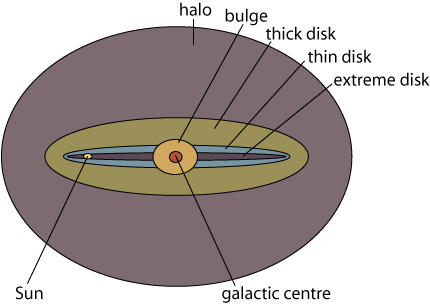 A cross-section of the Milky Way galaxy.

A picture of the Andromeda Galaxy, taken in the infrared wavelength. This view of the
same galaxy shown earlier in this tutorial greatly illustrates the spiral arms extending from the
centre. As Andromeda is the Milky Way’s closest neighbour (at 2.5 million light years away!), it
is thought that the two galaxies are very similar in structure. Andromeda is has just over twice as
many stars as the Milky Way.