Objectives
It has been established that a planet is a spherical, nonluminous body that orbits a star. Planets are typically either rocky or gaseous (see Unit 2, Lesson 1), and can range in size anywhere from one-sixth the size of the Earth, to over ten times larger in diameter than the Earth. Jupiter is one such “gas giant,” and others are currently being discovered orbiting distant stars.

Stars, by contrast, are luminous, gaseous bodies, and are often much larger than planets. It is because of their luminosity and extremely large mass that we can see them from distances of over 38,550,000,000,000,000 kilometres! But instead of appearing as the giants they are, they appear as tiny pinpricks of light in the night sky.

Regardless of their size, all stars are created in the same manner. Stars are formed in nebulae (plural for nebula) - huge clouds of gas and dust. Over time, the gas - mostly hydrogen - attracts other particles of gas and dust together by gravity creating a very dense cloud in a process called accretion. The cloud eventually gets so massive that it collapses on itself, forming a protostar in the centre. The pressure is so great in the core of the cloud, that the temperature of the centre of the collapsed cloud is about 10,000,000 K, more than enough to ignite the hydrogen gas and keep it burning. 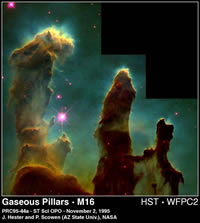 
The core of this “baby star” ignites from the high temperature and produces energy through fusion, the process of combining two atoms together, turning hydrogen into helium in a protostar. This is the same process that occurs in a hydrogen bomb – weapons that are usually over a thousand times more powerful than the atomic bomb dropped on Hiroshima. The centre of stars essentially has explosions such as these occurring continuously.


The size of the original nebula determines the size of the star that is formed. Often, nebulae are so large that several stars are formed at the same time, creating binary systems of two stars, and star clusters of many stars. Not all of the matter in the nebula collapses into the protostar. Instead, dust and debris accrete to form planetessimals and eventually planets. It is from this point forward that the life of a star changes depending on how massive it is. 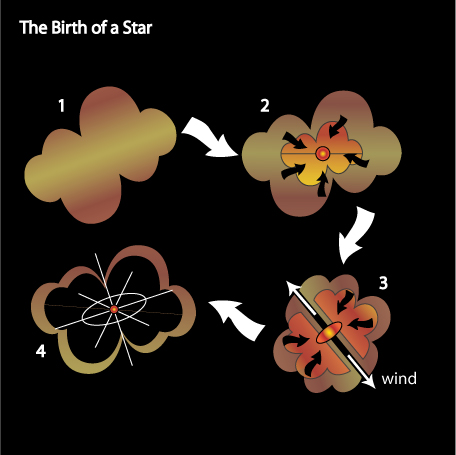 Caption: 1. As the particles in a nebula of gas and dust attract each other,
the nebula condenses to a smaller size. 2. As it gets smaller, it becomes
denser and eventually collapses. 3. The centre of the nebula becomes so hot
that the gas is ignited, and 4. it becomes a protostar.


Did you know?
The standard unit of temperature used in astronomy is the Kelvin (K), named after Lord William Thomson Kelvin (1824-1907), a Scottish physicist and mathematician. 0 K is the same as -273 degrees Celsius, meaning water freezes at 273 K and boils at 373 K. 0 K is also referred to as “absolute zero” and is defined as the temperature at which there is a complete absence of heat energy, and hence, no particle movement. The temperature of outer space is just below 3 K!


Throughout most of a star’s life, fusion continues to provide the star with energy, which it releases into space primarily as light. Stars live a very uneventful life as long as there is hydrogen to keep them burning.


Stars which are smaller than our Sun burn their hydrogen fuel relatively slowly, (much like a small car is more fuel efficient). They can live from 10 billion to 100 billion years. Most stars fall within this range. The Sun will live for 10 billion years in total, and is currently 5 billion years old.


Medium stars are hotter, burn their fuel more quickly, and live between 30 million and 5 billion years. The heaviest stars are so hot and burn their hydrogen so quickly that they live for less than 2 million years. 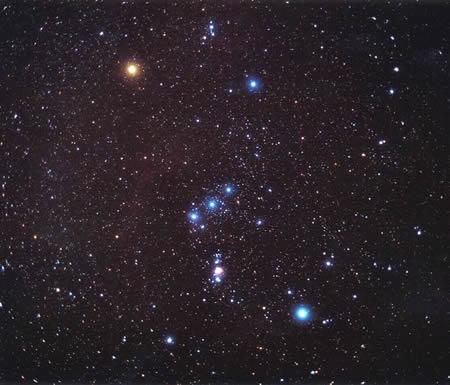 The top left corner of Orion features the star Betelgeuse (pronounced beetle-juice), which
is a red giant – a very large, cool star. Its red colour indicates its low temperature.
The opposite corner (bottom right) features the star Rigel, a blue-white, very hot star.

Did you know?
Astronomers classify stars by their temperature, and use letters to categorize them. From hottest to coolest, the classification goes O, B, A, F, G, K, M, so that an O star is hotter than a F star, which is hotter than a K star. The widely-used acronym used to remember the sequence is “Oh, Be A Fine Girl/Guy, Kiss Me!”

When a star exhausts the supply of hydrogen in its core, there is no longer any source of heat to support the core against gravity. The core of the star collapses under gravity's pull until it reaches a high enough density and temperature to start a new kind of fusion – fusing helium into carbon.


This is when small stars, like our Sun, stop burning. Once the helium is used up, the outside of the star expands to 10-100 times its original size (swallowing up the majority of the inner planets) and eventually it leaves behind a hot core of carbon imbedded in a new nebula of its own expelled gas. Radiation from this hot core will ionize the nebula producing a striking planetary nebula. The carbon core will eventually cool and become a white dwarf, the dense dim remnant of a once bright star.

The Cat’s Eye Nebula (above) and the Eskimo Head Nebula (below),
two examples of planetary nebulae.

Larger, hotter stars will continue burning after all the helium is gone – because, higher temperatures allow fusion to continue as carbon fuses into oxygen, neon, silicon, sulphur and other elements up to and including iron. Iron is the most stable form of nuclear matter and the largest atomic element that can be created in this process.


The iron core of the star cannot collapse, so when the star tries to collapse further, the remaining matter "bounces" off the core. This produces an even larger explosion known as a supernova. For up to one month, a single star undergoing a supernova can burn brighter than a galaxy of a billion stars. 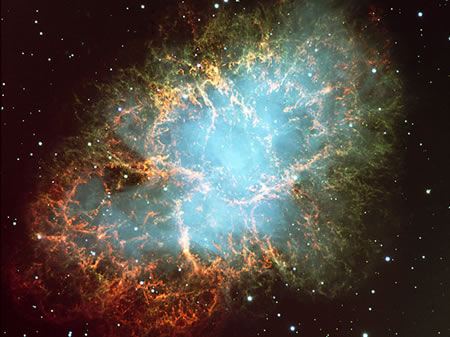 The Crab Nebula is all that is left after a supernova observed by
Chinese astronomers in the year 1054!
Supernova explosions do two things that are important in the creation of matter: Without supernovae, there would be no carbon, oxygen or other elements that make life possible, because it is only supernovae that release the larger elements from the gravity of stars. After the supernova explosion, what is left behind at the center is called a neutron star, made up of the extra neutrons from the explosive fusion process. The very largest of stars will continue to collapse even further, eventually forming a black hole from which nothing - not even light - can escape. It is believed that black holes exist at the center of many galaxies, including the Milky Way.