Objectives There are many other interesting effects that exist within our atmosphere. The first that we will discuss involves water vapour in the sky reflecting and refracting sunlight. This results in several phenomena such as Rainbows, Sun Dogs and Light Pillars. 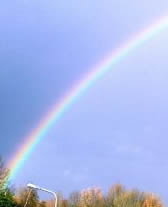 
Rainbows occur as the light from the Sun hits droplets of moisture in the sky and reflect and refract back to our eyes in the various colours of the spectrum. As the light hits the rain droplets, it passes through the front side of the water droplet and refracts or bends slightly. Then the light hits the back of the droplet and some of the light reflects back towards the observer. Different wavelengths of light refract at slightly different angles. In other words, red light bends at a slightly different angle than yellow or violet light. This creates the arc of colours that makes up the rainbow. 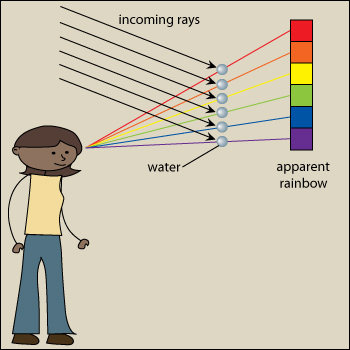 The light from the Sun bounces off water droplets in the sky at
different angles for each wavelength, or colour, of light.

Water droplets are needed for this effect to occur so rainbows are most often seen after a rainstorm when there is still moisture in the air. They are also seen often around water falls when there are water droplets in the air from the splashing water. Remember that when you are looking for a rainbow after a rainfall, you need to look away from the Sun. The light needs to shine past you, reflect off the back of the water droplet and then return to your eyes in order for you to see the effect.

Similar effects to rainbows are sun dogs and light pillars. Both of these phenomena occur as light refracts through tiny ice crystals in the sky, so they occur primarily during the winter months. Sun dogs, or ‘parhelion’ the scientific name, appear as a ‘halo’ around the Sun with colours much like a rainbow. This occurs as the light is refracted through the ice crystals, contained in cirrus or cirrostratus clouds, down to the observer. The halo appears at roughly 22? around the Sun. 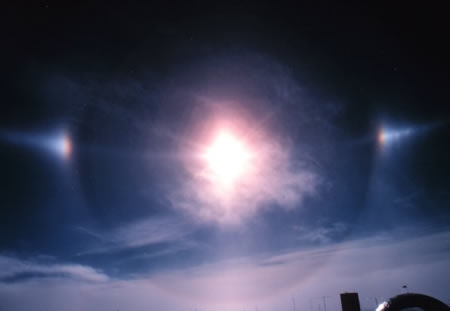 A Sun Dog is a halo of colourful light around the Sun.
The light is refracted by ice crystals in the winter sky.

Light pillars are a similar phenomenon to sun dogs. They appear as an extended ‘pillar’ of light usually above or below a strong light source. The most common instance of light pillars comes from the Sun, in which case it is sometimes called a Sun pillar, rising on a winter morning. A light pillar occurs as ice crystals closer to the surface of the Earth reflect light towards the observer. Essentially, the ice crystals act almost like lenses, sending additional light towards the observer than would normally occur. This is slightly different than what happens in a rainbow or sun dog, as the light is simply reflected rather than refracted. This means that there is no dispersion of light and the rainbow colours do not appear. 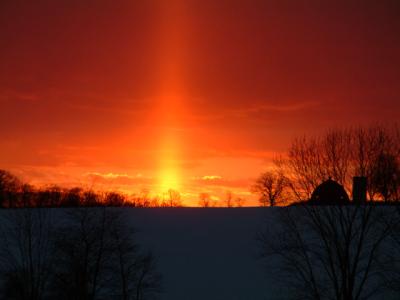 A light pillar occurs as light is reflected off of ice crystals in the air.

A second effect worthy of mention is noctilucent clouds. Noctilucent clouds are the clouds at the highest altitude on Earth. They exist at the level of about 85km above the Earth, within the mesosphere. They are only visible between the latitudes of 50? and 60? in both the northern and southern hemispheres, and they are primarily visible during twilight during the summer months. This gives them their name, from Latin, meaning roughly ‘night shining’.

These clouds appear near the horizon when the Sun is still in fact below the horizon, leaving the ground near the observer and the lower layers of the atmosphere still in shadow. Essentially the light from the Sun shines at just the right angle to bounce off the bottom of these clouds and reflect down to the observer. They are only visible in this way because they are so faint that only with the Sun below the horizon are they bright enough to stand out against the sky.

Noctilucent clouds as seen casting erie colours at sunset here. These special clouds
are only visible when it is still night on the surface of the Earth, but the Sun has already
risen to shine on these high floating clouds.

Noctilucent clouds are not well understood, but they are thought to be caused by small amounts of water vapour. They are difficult to study because of their extreme altitude. Weather balloons cannot fly high enough, so rockets are most commonly used to study this phenomenon. Recently there has been some evidence that exhaust fumes from the Space Shuttle may be enhancing these clouds.

Zodiacal light is an amazing phenomenon which is difficult to see, but worth the effort. It is only visible just before dawn or just after dark. Zodiacal light appears as a faint glow in the sky roughly triangular in shape, following the path of the Sun, the ecliptic, across the sky. Although it is faint, on a moonless night it can account for more than half of the light visible in the night sky. A dark night is needed, though so a bright moon phase will often wash out a good view of Zodiacal Light. 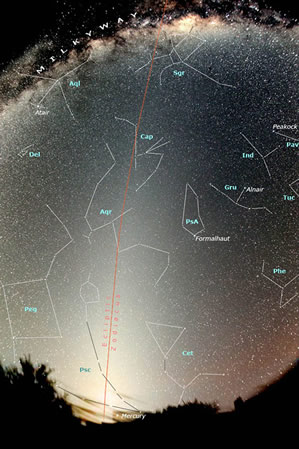 The triangular glow of Zodiacal light is most often seen in the east, just
before an autumn dawn, or in the west just after a spring sunset. This image
has several of the zodiac constellations (Pieces, Aquarius, Capricorn
and Sagitarius) added to show how the light follows the ecliptic.

The name ‘zodiacal light’ comes from the fact that the light follows the line of the ecliptic. The constellations along this line have been named according to the 12 zodiac signs, giving this light its name.

Zodiacal light is caused by particles in the ecliptic as well. There is an often forgotten part of the solar system that is the cause of this phenomenon. Circling the Sun is a cloud of interplanetary dust, roughly the shape of lens. It extends out past the orbit of the Earth and also encircles the Sun. The light of the Sun reflects off this dust to produce the zodiacal light.

Did you know? Zodiacal light has another name: the false dawn. Because this light often appears before dawn it almost appears as if the Sun is getting close to rising. Actually it is misleading as the Sun follows some time after. Zodiacal light will actually fade before the true dawn arrives.