Objectives
When ancient cultures studied the skies, even they could see that planets were not like stars. Among other things, they changed their position in the sky relative to other stars, and at some points even seemed to reverse their direction as they moved across the celestial sphere. Because of this, they were given the name “planets” which literally means “wanderers,” making reference to their strange wanderings through the night sky.
One of these strange movements is now known as retrograde motion. In fact, retrograde motion was such a strange phenomenon, that it caused astronomers to completely re-think their Earth-centered model of the solar system. Now that we perceive the Sun to be at the centre of the solar system, and the planets in orbit around it, retrograde motion is easily explainable.
The farther a planet is from the Sun, the longer it takes to complete an orbit (see Table 2 in Unit 2, Lesson 1 for orbit times for the planets). Because of this, a planet such as Mars will be overtaken by a faster-moving planet, such as Earth or Venus, as it travels around the Sun. As the Earth passes by Mars, an observer on the Earth will see that from night to night, Mars appears to be moving to the east, then stopping and moving to the west before stopping a second time and continuing to the east. 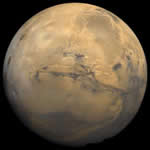 Mars
This retrograde motion is really just an illusion; all planets continue to move around the Sun in the same direction at all times, a motion known as prograde motion. 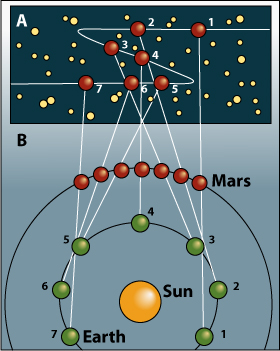 Pictured Above: As the Earth orbits the Sun, it catches up to and passes Mars. As it does this, the position of Mars relative to the background stars appears to reverse direction, and then continue forwards once the Earth has gone past. The left of the diagram shows what would be seen from the Earth, while the right of the diagram shows the location of the Earth and Mars as this phenomenon occurs.


From the Earth, we can see retrograde motion in all of the planets’ orbits except for Mercury's and Venus's, because their orbits are closer to the Sun than the Earth’s. An observer on Venus, however, would be able to see the Earth undergo retrograde motion, “moving” backwards in the sky! Mars goes through retrograde motion approximately every 25.7 months.

There is a second type of retrograde motion which does not involve the orbit direction of a planet, but instead its rotation about its axis. We learned in Module 1 that the Earth rotates from west to east, when observed from space. A planet in retrograde rotation does the opposite, rotating from east to west. Only two planets do this: Uranus and Venus, due to the extreme tilt of their axis (see Did You Know…?! In Unit 2, Lesson 1). Observers on these planets would see the Sun rise in the west and set in the east!
Check It Out!
Want to see NASA's view of the solar system, check out the NASA JPL Planetary Photojournal.