IN COLLECTION
Objectives
In the past decade, astronomers have become very excited about discovering planets orbiting neighbouring stars, making what’s called a stellar system. This is the more general term of which our solar system is our local example, as the word ‘solar’ refers to our Sun in particular. 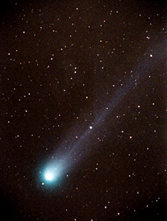 Comet Hyakutake
A planet is a spherical, non-luminous (does not create its own light) body which orbits a star. In 2006, it was decided that by definition, a planet will also have cleared out the neighbourhood around its orbit. By this more strict definition, asteroids cannot be planets (as they travel in orbit together around the Sun), and Pluto is no longer a planet because it hasn’t cleared out its own orbit.

Canadian Contributions
‘MOST’ (Microvariability and Oscillations of STars) is a Canadian project that uses a satellite to measure minute variations in the brightness of stars. As a planet moves in front of a star, it reduces the brightness of the star by a tiny amount, by blocking the light. MOST is able to detect those changes in brightness, and locate stars that might have planets orbiting them! 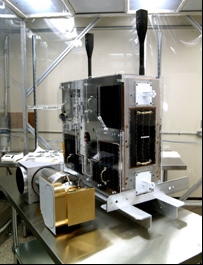 Canada's MOST Satellite is no bigger than a suitcase.

Our solar system consists of eight planets orbiting the Sun in the centre of the system. There are also several dwarf planets (planets that have not cleared out their orbit) such as Pluto and the more recently discovered Sedna. There are also many moons, comets, an asteroid belt and lots of space debris in the form of rocks and dust.
The following table lists the planets in order, starting closest to the Sun, along with their approximate masses in comparison tot he Earth's mass (5.974x1024 kg, or, 5,974,000,000,000,000,000,000,000 kg!). It also lists the average distance to the Sun for each planet in Astronomical Units (AU). An Astronomical Unit is the average distance between the Sun and the Earth: 1.496x108 km (= 149,600,000 km).

The Sun is by far the largest celestial object in our solar system, with a mass about 330,000 times that of Earth’s, and so it possesses the most gravity. This force pulls all the objects in the solar system toward the Sun. However, since the objects are not at a standstill, they are not pulled directly into the centre, but instead end up orbiting the Sun.
Did you know? Why is it colder in January when the Earth is actually closer to the Sun than in July? See Unit 1 - Lesson 2 for the answer!

Ideally, planets would have perfectly circular orbits. But because the planets also pull a little bit on the Sun due to their own (smaller) gravities, the planets all have orbits that are elliptical – like an oval – with Venus having the most circular orbit while Mercury’s is the least. Comets and some dwarf planets like Pluto often have greater elliptical orbits.

Traveling around the Sun in an ellipse brings a planet closer to the Sun during part of its year, and further from the Sun at other times of the year. When a planet is at its closest point to the Sun it is at perihelion (peri = close, helio = Sun). When a planet is at is furthest from the Sun it is at aphelion (ap = far). The Earth reaches its perihelion on January 3, and its aphelion on July 4.

Perihelion and Aphelion denote the two extremes positions of the Earth as it orbits the Sun.


Most people know in general what the solar system looks like with the Sun in the centre and the planets orbiting around it. However, there are a few important features of the solar system which are rarely pointed out and should be mentioned.

Did you know?
We learned in Unit 1 that the Earth's axis is tilted 23.5?. Nearly all of the planets in our solar system also have a tilted axis, but some are more extreme than others. Uranus’ axis is titled at about 98?, so its north pole is facing the Sun - making Uranus appear to be rolling around its orbit! Venus is even more extreme – it’s angle is tilted at 177?, meaning it is “flipped,” and is orbiting the Sun upside down!

The solar system is considered to be ‘flat’. This means that each of the planets is orbiting around the Sun in the same plane. Imagine the solar system as a Frisbee, with the Sun in the centre. The planets all move around the sun within the plastic of the Frisbee and not above or below, giving it a very flat appearance. This plane, when seen from Earth is called the ecliptic, and represents an imaginary line in the sky along which we can find the planets and our Moon.

The second major point is the order of planets in the solar system. You may notice that the first 4 planets (Mercury, Venus, Earth and Mars) are relatively close to the Sun, while Jupiter and the others (Saturn, Uranus and Neptune) are much farther away. The planets are divided into 2 zones: the terrestrials and the gaseous. 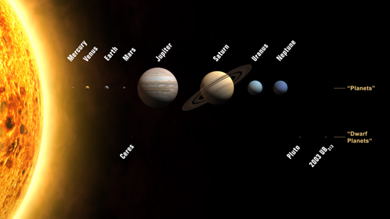 Objects in our solar system. Note: Distances are not to scale.

The four inner planets are the terrestrial planets. They are grouped together because they are all close to the Sun, much smaller than the outer planets and they all have solid surfaces, made primarily of rock and metals. The gaseous planets are all much farther away, much larger and also they are all primarily made of gas. The image above is not at all to scale as Jupiter is five times as far away from the Sun as Earth and Neptune is thirty times as far away. 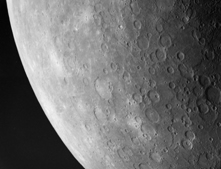 Mercury is an example of a terrestrial planet – close to the Sun and primarily rocky. 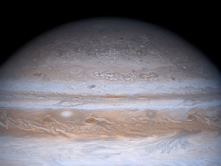 Jupiter is the largest of the gaseous planets – farther from the Sun and primarily gas.

Between Mars and Jupiter, the dividing line between the two types of planets, is the asteroid belt. This is a ring of rocks and small solar system bodies that form a full ring around the Sun.

Pluto’s classification as a planet has been under debate for decades – it is too small to be a gas giant, and too far from the Sun to be included with the terrestrials. As more and more Pluto-sized objects are being discovered out beyond Pluto, astronomers decided to restrict the definition of what is a planet to prevent there from being too many new ‘planets’. Most of these new objects now fall into the category of dwarf planets along with Pluto.

Did you know?
Astronomers think that the planets were formed when large amounts of space debris were pulled together by gravity over long periods of time as stars formed. The asteroid belt is thought to be debris that was not pulled together to form a planet. This is because it lies in a perfectly balanced position between being pulled by the Sun’s gravity and the gravity of the largest planet, Jupiter.

Canadian Contributions Dr. Brett Gladman of the University of British Columbia is one of Canada’s leading researchers in the observation and detection of small solar system bodies such as moons, asteroids and objects out beyond Pluto’s orbit. Dr. Gladman received degrees in Physics and Astronomy from the University of Alberta and Queen’s University before going to Cornell for his PhD, and eventually returning to Canada to teach and conduct research. His most recent research has focused on the discovery of irregular moons of gaseous planets and the discovery of another “Trans-Neptunian Object” – a small solar system body out beyond Neptune, akin to Pluto.

Comets are yet another part of our solar system, much smaller than planets or dwarf planets, but still usually several kilometers across. They are usually made up of rock, dust, ice and various gases. Comets orbit the Sun like planets but often in very elliptical paths, and sometimes in the opposite direction to planets, who all orbit counterclockwise. Most comets spend the majority of their time outside the orbits of the planets. 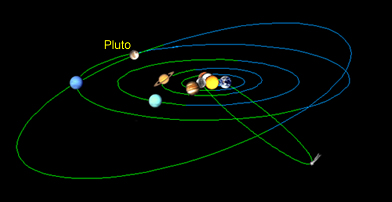 Comets that have orbits less than 200 years are called short-period comets, or periodics. Those that have orbits from 200 years to millions of years, are called long-period comets.
Halley’s Comet is perhaps one of the most famous example of these celestial bodies. Halley’s Comet is in a very elliptical orbit, shown in the image above, that brings it close to the Sun and then out past Pluto in a regular 76 year cycle. When a comet approaches the Sun it begins to melt. The solar wind from the Sun blows off the melted ice and dust into a long tail that extends from the comet. This tail usually doesn’t extend behind the comet as it moves through space. The tail will always point directly away from the Sun as the solar wind blows off the debris. 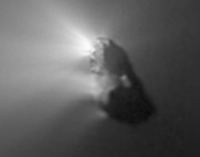 The nucleus of Halley’s Comet, photographed
in 1987 during its last visit to the inner
solar system.