Even before the various coordinate systems were used to depict locations in the sky, ancient cultures grouped stars into recognizable patterns. Nearly every culture had their own set of stories and legends to describe how figures such as lions, bears, kings, snakes and dogs made their way into the heavens. 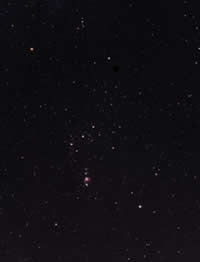 Today, astronomers recognize 88 of these constellations: configurations of stars that remain fixed against the backdrop of the celestial sphere. The celestial sphere itself is an ancient concept, as it was once believed that the Earth was located at the centre of a black sphere, with stars permanently attached to the inside surface of the sphere. Instead of believing in the rotation of the Earth, it was believed that this sphere of stars rotated while the Earth stood still, making a curtain of stars rise and fall throughout the night.

We now know that there is no such sphere, but for the purpose of describing patterns of stars as we see them from the Earth, we can imagine them fixed in place as the Earth rotates on its axis. 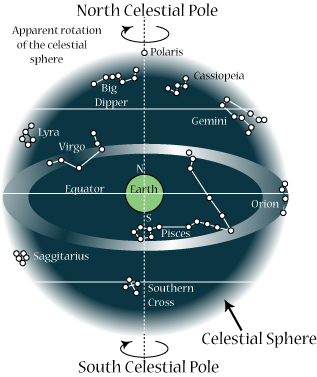 If you go out at night and watch the sky for a few hours you will notice that the stars seem to change position. As aforementioned, they do not actually move, but as the Earth rotates around its axis we see the stars move across the sky above us. If you stay out long enough, though, you will notice that one star does not seem to move at all, and all the other stars on the celestial sphere seem to circle around it, creating beautiful arcing star trails in long-exposure photographs. 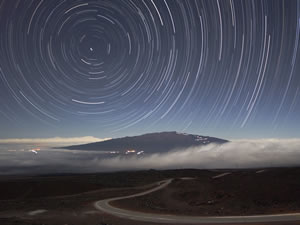 This is due to the fact that the axis around which the Earth rotates points almost directly at one star in the northern hemisphere. One could imagine this same star being at the very top of the celestial sphere. As the celestial sphere “turns” that one star at the top stays in the same spot. This stationary star is named Polaris, “The North Star,” since it is almost directly above our north pole (and the north pole of the celestial sphere). Since this star is almost exactly due north in the sky, locating it will always point you in the north direction, making it an important star when it comes to basic navigation. The apparent motion of all the other stars around Polaris is called circumpolar motion.

During the centuries of sailing the oceans Polaris was a consistent locater among the many stars for ship navigators. In order for navigators to find the right star, they made use of the patterns mentioned earlier – constellations.