IN COLLECTION
Objectives
To an untrained observer, the night sky is full of small points of light. Some make recognizable patterns, which can be described so that others can find them. But how do you describe exactly where a particular star is found in the sky? There are two systems of reference used by astronomers to locate any object in the sky. 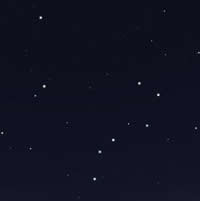 Big and Little Dippers
The altitude-azimuth system is based on the observer, and what he or she can see from his or her location. Imagine standing in the middle of a field, facing due north, and imagine a bright star just off to the right. The location of that star can be described using two coordinates: in what horizontal (or cardinal) direction it is found (azimuth), and how high up in the sky it is (altitude). Both coordinates are measured in degrees.

The azimuth is measured from the point on the horizon due north and moving eastward to the point directly under your star and goes to a maximum of 360?– an azimuth of 360? brings you back to due north. 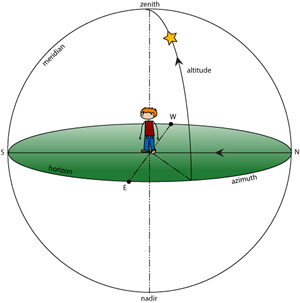 Locating a star using altitude and azimuth
In order to find a star with an azimuth of 64 degrees and an altitude of 31 degrees, you would begin by facing due north. Turn to the right (eastward) 64 degrees, and then look about a third of the way from the horizon to the zenith.

While this is a straightforward system of reference, it is not very practical. While you might observe a star at an azimuth of 64 degrees and an altitude of 31 degrees, an observer at any other location on the Earth would have to use slightly different coordinates based on their position. Further, since the stars appear to revolve around the Earth, even from your location, your bright star will find itself at different coordinates within the hour.

What is required is a coordinate system that does not depend on the observer, but on a fixed reference point that does not change over time. For points on the Earth, longitude and latitude coordinates serve this purpose – a city located at 113 degrees west and 55 degrees north will always be located at 113 degrees west and 55 degrees north, whether you are traveling to it from Vancouver, British Columbia, or Iqaluit, Nunavut. The equatorial coordinate system does the same for points in the sky.

Declination (or, dec) is used instead of latitude, and measures a star’s north-south position relative to the celestial equator. Recall that the equator is a fixed object, relative to the Earth. A positive declination indicates being north of the equator, while a negative declination indicates being south of the equator. Just like altitude, declination is measured in degrees, up to +/- 90 degrees. Polaris, being directly above the north celestial pole, would have a declination of +90 degrees.
Right Ascension (or, RA), is used instead of longitude. It measures the east-west position of a star relative to the point where the Sun crosses the equator on the vernal equinox. This is a point that remains fixed relative to the Earth, and is analogous to the point on the Earth where the Prime Meridian passes through the equator – all longitudinal readings are based on their distance east or west of that point. So, too, is the right ascension measured for stars. RA is measured in hours, minutes and seconds of the vernal equinox, moving eastward along the equator. 24 hours is equivalent to 360?. 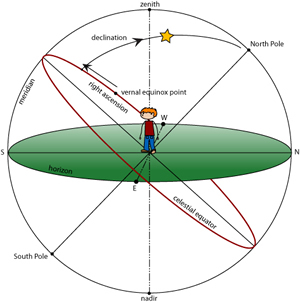