Unit 1 - Lesson 1: Introduction to the Earth

Objectives Looking up at the sky on a clear night is surely invokes feelings of curiosity, wonder and awe at the sight of stars, planets, “shooting stars” and faraway galaxies. For millennia, humans have been gazing at the sky and experiencing those same emotions. One of the very first sciences was the observation and recording of the positions of the stars, as we can see from relics such as Stonehenge, the Great Pyramids and medicine wheels of the Native Americans. With these chronicles of the sky, astronomy was born.

But how do you tell which way is which, when the night sky is black in all directions, the positions of the stars seem to change by the hour and the patterns of stars in the sky change by the season? Early astronomers realized they needed a frame of reference.

History of Astronomy in Canada Stone medicine wheels - large circular configurations of stones thought to indicate positions of stars on significant dates - were first constructed approximately 2200 years ago, on the northern plains of Alberta and Saskatchewan. Remnants of over 20 medicine wheels have been found in the two provinces, and which are still being excavated and interpreted.


The planet Earth, like most planets, is approximates in the shape of a sphere. The poles of a planet are the topmost and bottommost points on the sphere, while the equator circles the Earth halfway between the two poles, dividing the planet into two hemispheres. On Earth, our “topmost” pole is the North Pole, while the South Pole is on the “bottom” of the planet. The equator therefore divides the planet into a Northern and Southern hemisphere. 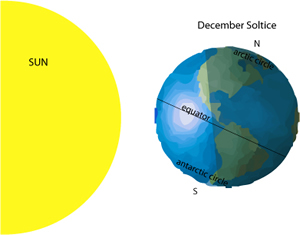 The Earth can be divided into northern and southern
hemispheres, divided by the equator. Size of the Sun
and distance to the Sun are not to scale.

Did you know?
The Earth is not a perfect sphere! As a result of the Earth’s rotation it is wider at the equator and flatter at the poles, making it look like a slightly flattened ball. This is caused by the spinning of the Earth. Imagine a filled water balloon that is spinning. The water is pushed as far out as possible in the middle and it ends up being flattened on the top and bottom.

The poles also serve as an axis, around which the planet rotates. When seen from space, the Earth rotates from left to right. Imagine looking down on the Earth from above the North Pole: you would see that it rotates counter-clockwise.