Movement of Earth in the Solar System -- Seasons Lab

Reviews - Movement of Earth in the Solar System -- Seasons Lab

Information - Movement of Earth in the Solar System -- Seasons Lab

A Tour of the Universe

Movement of Earth in the Solar System

Astronomy Lab
Lesson: Movement of Earth in the Solar System

Question: Why do we experience seasons on Earth?

Materials you will need:
• 1 lamp free of its lampshade
• A place to plug your lamp in
• 1 planet Earth model
• 1 elliptical orbit
• 1 pushpin inserted in the Earth to indicate where school is

Procedure:
Step 1: have your partner hold the “sun” (the lamp) in the center of the ellipse turned on.

Step 2: tilt your Earth to a roughly 23-degree angle and step into your elliptical orbit.

Step 3: Holding Earth, walk around the sun, keeping the north pole of Earth pointed up toward the ceiling.

Step 4: Once you’re comfortable with the movement of the Earth around the Sun and the reason for the seasons, answer the following questions. It may help you to use a diagram with your explanations.

(1) In what direction is Earth’s axis tilted in the summer? How do you know?


(2) In what direction is Earth’s axis tilted in the winter? How do you know?

(3) How do the lengths of nights change from summer to winter? How do you know?

(4) Draw your own model of the orbit of Earth around the Sun. Be sure to make it clear how the tilt of Earth affects the seasons.

(5) Why is it hotter in the summer than in the winter, even though the Earth is slightly closer to the Sun the winter-time? (Be careful, there are actually two reasons for this, can you find them both?)

A Brief Explanation
Sunlight hits the Earth’s surface most directly near the equator. Near the equator, the sunlight arrives at a steep angle. As a result, it is spread out over a greater area. That is why it is warmer near the equator than near the poles.

If the Earth’s axis were straight up and down, temperatures would remain fairly constant for a given area. Earth has seasons because its axis is tilted. Earth’s axis is always tilted at an angle of 23.5?. As earth revolves around the sun, the north end of its axis is tilted away from the sun for part of the year and toward the sun for part of the year. Summer and winter are caused by the Earth’s tilt as it revolves around the sun. The change in seasons is not caused by changes in the Earth’s distance from the sun. In fact, Earth is farthest from the sun when it is summer in the Northern Hemisphere. 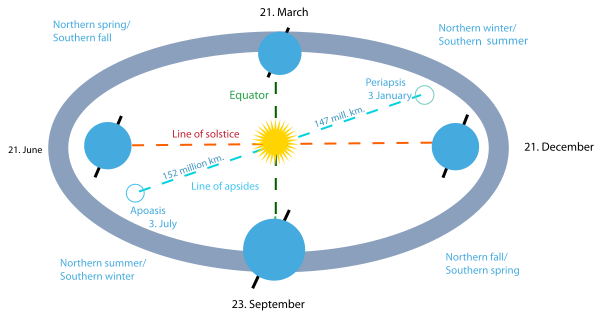 (6) Were your lab results supported by this reading? If not, please explain why your results were different and what you think accounted for this difference.