This lesson is designed for middle school students with no previous knowledge of Eratosthenes and measuring the circumference of the Earth. This lesson can be inserted in a variety of places in the unit, including at the beginning after "Aristotle and Ptolemy", after "Movement of Earth in the Solar System," or after "Earth and the Moon." Students need to be somewhat familiar with ratios, proportions, and solving algebraic equations. As students may have many questions about the set-up of the experiment or the set-up of the proportion, I suggest teaching this lesson outside with sticks set up to represent the two towns or in the classroom with a similar model set up so students can see the experimental design.

Two sticks, poles, or plastic cones to represent the two sticks in Alexandria and Syene. A map of the region so students have the geographical context of the experiment. Images to support the lesson.

[I find this lesson works particularly well on a sunny day outside. If you can, hold part or all of this lesson outside to demonstrate what Eratosthenes was looking at when he took his measurements for calculating the circumference of Earth. Set up a stick in the ground (you may want to place a piece of white paper on the ground next to the shadow to highlight the shadow the stick casts) so that the sun casts a shadow visible to students.]

Before we begin today’s lesson, I’d like you all to take a look around. What do you see? [Have students describe their surroundings]

Aristotle noted that as travelers moved from North to South, the constellations rose higher above the horizon and the shadow of the Earth during a lunar eclipse was circular. 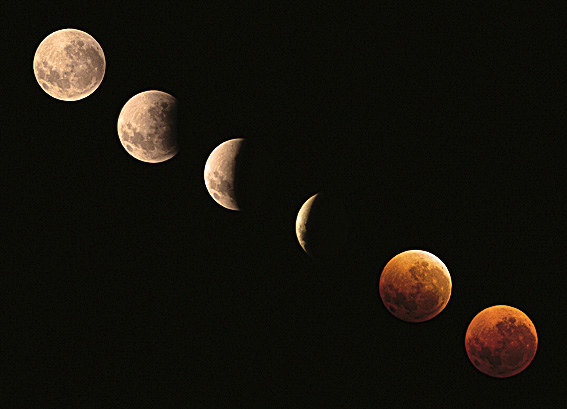 (Earth’s shadow across the moon during a lunar eclipse.
License: CC-BY-SA; Luc Viatour; Source: http://commons.wikimedia.org/wiki/File:Eclipse_lune.jpg)
Finally, there was the observed evidence that a ship on the horizon seems to sink below the water, when in fact it is floating on the water. 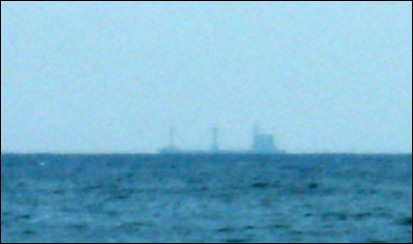 (Ship visible on the horizon, appearing to sink below the water.
License: CC-BY-SA; Anton Source: http://en.wikipedia.org/wiki/File:Shiphorp.jpg)

But, if the Earth is round, what other evidence is there? And, how do we measure it?

This was the perfect question for a man named Eratosthenes. Eratosthenes was a Greek, born in present-day Libya in 275 BCE. He went to school in Athens and moved to Alexandria to become the third chief librarian of the Royal Library of Alexandria. The Royal Library was the largest and most famous of all libraries in the ancient world, and this was quite an honor for Eratosthenes.
Eratosthenes was a great mathematician and philosopher in his own right, but he earned the nickname Beta by his friends because he always seemed to be the second best at everything he tried. But, it was through his inquisitive mind, mathematical reasoning, and keen observation that he managed to be the first Greek to measure the world! The story goes that Eratosthenes heard a story from a friend who was traveling that during the summer solstice, the longest day of the year, in Syene, a town south of Alexandria, the Sun lit up the bottom of the deepest well in town and a stick cast no shadow. 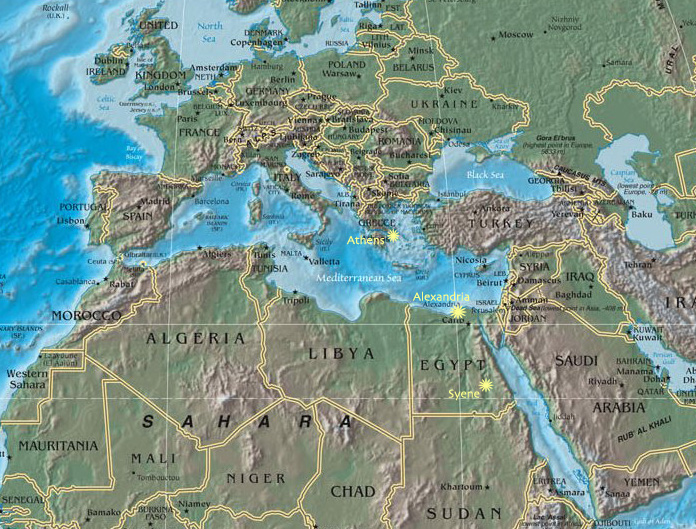 While this might sound mundane, Eratosthenes found this to be particularly interesting because he knew that in Alexandria, there was never a day that a stick cast no shadow or the bottom of the deepest well could be lit by the Sun.

Eratosthenes thought hard about this phenomenon and finally reasoned that it must be that the Sun is higher overhead in Syene than in Alexandria. He realized that if he could prove this to be true, this would be valuable evidence showing that the Earth is indeed a sphere.

Supposedly, Eratosthenes put a stick in the ground during the next summer solstice in Alexandria and measured the angle of the shadow at noon. He found the angle to be 7.2°, which is what proportion of a circle?

So, the angle was 1/50th of a circle. Which would imply that the distance between Alexandria and Syene is 1/50th of the globe. If we wanted to find the circumference, or distance all the way around the globe, how would we set up the proportion to solve that problem?

That’s exactly what Eratosthenes did! He hired a man to walk from Alexandria to Syene, counting his steps. The distance was measured to be roughly 5000 stadia, or 500 miles. So, now solving the problem is easy, what do we need to do? 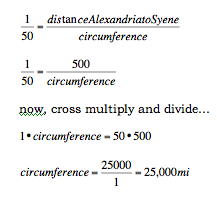 [I do not work this problem out for my students. Rather, I ask them to work it out and tell me how accurate Eratosthenes’ measurement was and what sources for error might have been.]

All of this Eratosthenes calculated with just a few simple observations, two measurements, and a bit of problem solving. And, if his calculations were correct, that meant the Earth was much larger than Greeks had before realized. In fact, Eratosthenes was fairly accurate; the circumference of Earth at the equator is 24,901 miles!

Unfortunately for Eratosthenes, many of his works were lost over time, so we only know about his contributions to science by the recollections of others. Through his contribution that the Earth was measurable Eratosthenes proved that the universe was comprehensible and understandable. You would think that Eratosthenes’ contributions would have revolutionized how the Greeks thought about the world. Maybe they would have jumped in their ships and headed off for the yet un-realized rest of the globe. Or maybe they would have started predicting what else could be out there. Surprisingly, for many generations, people seemed to forget about Eratosthenes’ contribution and measurement. In fact, it doesn’t crop up again until Ptolemy in about 140 CE.