This simulation shows the first 20 milliseconds in the life of a neutron star which is formed in a Type II supernova. After an initial collapse phase, the neutron star becomes unstable to convection. The resulting convective motions destroy the spherical symmetry of the star and rapidly mix the inner regions. In addition, the neutrino flux from the neutron star will be non-spherical and will be significantly enhanced by the convective motions. This may have major implications for the Type II supernova mechanism. The calculation was performed using the Piecewise-Parabolic Method for hydrodynamics. The computational grid contained 300 zones in radius and 200 zones in angle. The inner 200 zones in radius were uniformly spaced, ranging from the inner boundary at 25 km to 175 km. The outer 100 zones were non-uniformly spaced and stretched to 2000 km. Only the inner 200 zones are plotted. The inner boundary was treated as a hard sphere. At the outer boundary, zero gradients for all the variables were assumed. Periodic boundary conditions were used along the sides of the grid. The following sequence shows the temperature structure for 20 milliseconds after the shock stalls. The minimum temperature is approximately 1.35 MeV. The maximum temperature varies from 6 MeV at the beginning of the calculation to 10 MeV at the later times.
↓http://svs.gsfc.nasa.gov/vis/a000000/a000000/a000047/index.html 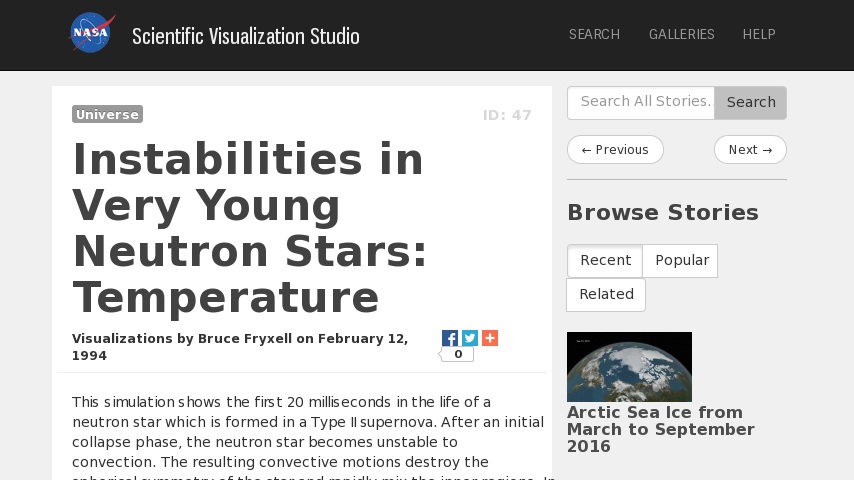