Graphs and Tracks Impresses as a Kinematics Teaching Tool

Reviews - Graphs and Tracks Impresses as a Kinematics Teaching Tool

Information - Graphs and Tracks Impresses as a Kinematics Teaching Tool

The ability to construct and interpret graphs associated with simple motions of objects is unquestionably a desirable outcome of physics education. The computer program Graphs and Tracks was designed to help students build such skills. The genesis of Graphs and Tracks dates from the early 1980s, when the Physics Education Group at the University of Washington began conducting research on student understanding of the kinematic concepts of 1D velocity and acceleration. A physical system similar to the one simulated in Graphs and Tracks, consisting of a ball rolling on a slotted track, has been used by the Physics Education Group and has been integrated into curricular material. Graphs and Tracks was updated in the late 1980s to reflect insight drawn from research concerning student understanding of graphing concepts used in kinematics. The system simulated in Graphs and Tracks is a ball sliding without friction along a segmented track in which each segment can have a unique slope. Transitions from one segment of the track to another are artificially smooth. As users are informed, the vertical dimension of the track is exaggerated onscreen so that slopes appear up to nine times greater than they actually are. Thus, the appearance of the ball's motion onscreen is highly two-dimensional. The package is divided into two programs: Graphs and Tracks I: From Graphs to Motion and Graphs and Tracks II: From Motion to Graphs. Both sections include online tutorial instruction on how to operate the program. These tutorials thoroughly cover all of the basic functions used in the program.
↓http://www.compadre.org/portal/services/detail.cfm?ID=3025 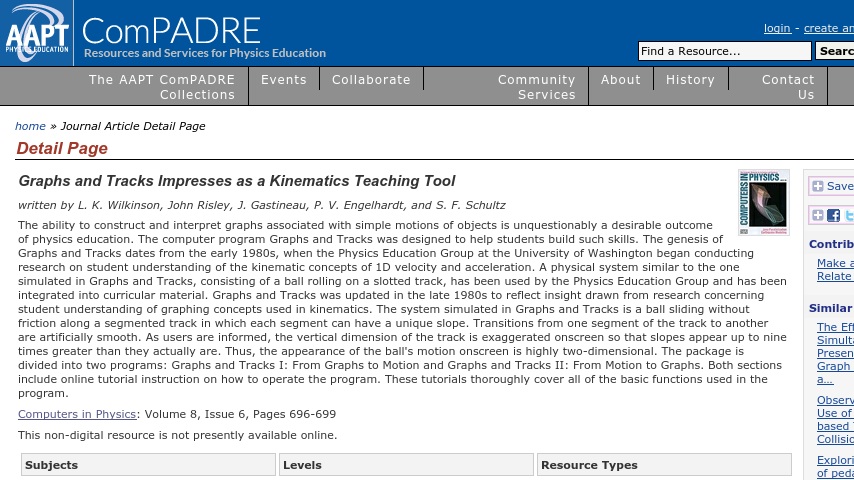