Dian Fossey January 16, 1932 – c. December 26, 1985) was an American zoologist who undertook an extensive study of gorillagroups over a period of 18 years. She studied them daily in the mountain forests of Rwanda, initially encouraged to work there by famousanthropologist Louis Leakey. Her 1983 book, Gorillas in the Mist, combines her scientific study of the mountain gorilla at Karisoke Research Centerwith her own personal story. Fossey was murdered in 1985; the case remains open.[1] 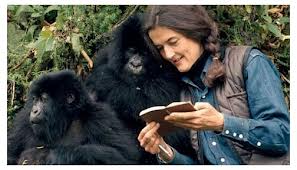 Called one of the foremost primatologists in the world while she was alive, Fossey, along with Jane Goodall and Birut? Galdikas, were the so-calledTrimates, a group of three prominent researchers on primates (Fossey on gorillas; Goodall on chimpanzees; and Galdikas on orangutans) sent by Leakey to study great apes in their natural environments.