Confronted by a political standoff, the country of Belgium goes up for sale on eBay

Reviews - Confronted by a political standoff, the country of Belgium goes up for sale on eBay

Information - Confronted by a political standoff, the country of Belgium goes up for sale on eBay

The EU's trial balloon Walloonshttp://www.latimes.com/news/opinion/commentary/la-oe-rodriguez17sep17,0,5030564.column?coll=la-util-opinion-commentaryCulture clash may break up Belgiumhttp://www.ft.com/cms/s/0/33d745a0-6607-11dc-9fbb-0000779fd2ac.htmlDisgruntled voter puts Belgium for sale on eBayhttp://cnews.canoe.ca/CNEWS/WeirdNews/2007/09/18/4506139-ap.htmlHistory of Belgium: Primary Documents [pdf]http://eudocs.lib.byu.edu/index.php/History_of_Belgium:_Primary_DocumentsBrugge Virtual Tour [Quick Time]http://www.virtualbruges.be/When most people think of political strife and turmoil, the country of Belgium probably does not pop into their mind as the first place that might be beleaguered by such problems. However, Belgium has been roiled by political crisis as of late, as the country recently passed the 100-day mark without a government. The country held an election on June 10th, and since that date, the country's politicians have been unable to agree on a new coalition government. Separatist feelings continue in the Flanders region of the country, and some have suggested that residents there are beginning to grow weary of the continued political standoff. One Francophone politician, Louis Michel, commented "One hundred days to form a government? We've seen worse." Michel is certainly correct, as it took Belgian politicians 148 days to form a government in 1988. Citizens have begun to take matters into their own hands, as one resident, Gerrit Six, recently did when he put the country up for sale on eBay this past Saturday. Six offered the advertisement as a way to express his frustration with the ongoing situation, and he remarked in a recent interview, "You almost have to throw a rock through a window to get attention for Belgium." The ad was pulled several days later after a bid of $14 million was made "to avoid confusion." Peter Burin, public relations manager for eBay Belgium noted, "This person, in a very funny way, reminded the Belgians what a great country Belgium actually is and it would be a shame to sell it."The first link will take visitors to a news article from this Wednesday's Scotsman paper which talks about the ongoing political situation in Belgium. The second link leads to a piece from the Los Angeles Times' own Gregory Rodriguez on the broader implications of the situation in Belgium. Moving on, the third link leads to a piece of commentary by Sarah Laitner, writing for the Financial Times. The fourth link leads to an article from CNews which offers some more details on Belgium's brief appearance on eBay as a "for sale" auction item. The fifth link leads to a great selection of primary documents on the history and evolution of Belgium created by Richard Hacken at Brigham Young University. Finally, the last link leads to a delightful virtual tour of the city of Brugge, Belgium.
↓http://scout.wisc.edu/Reports/ScoutReport/2007/scout-070921 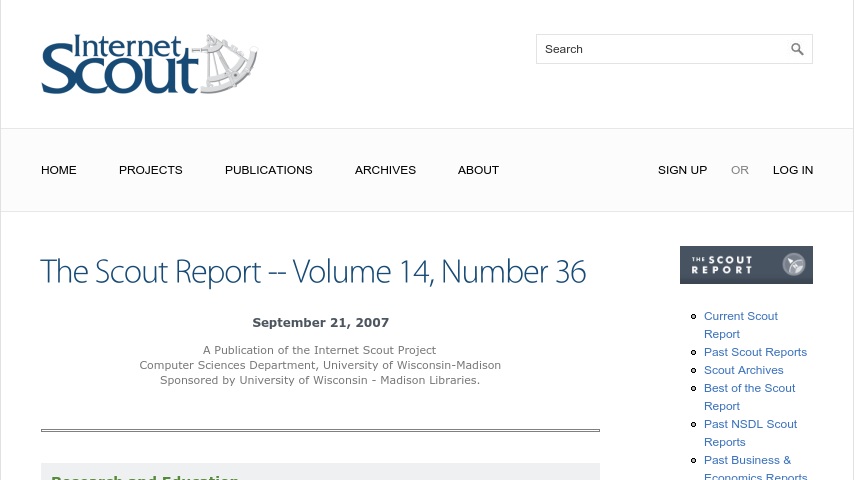