Lesson 22, Darwin in Historical Context For thousands of years, philosophers and scientists have pondered the origins of the organisms found on Earth. As far back as the ancient Greeks, people realized there was a huge variety in the complexity of the plants and animals inhabiting the environment. Over the centuries, new discoveries have led to new ideas about how an organism changes over time. The current, most widely accepted theory among the members of the scientific community is 's theory of evolution by natural selection. In this Lesson, we'll look at the major ideas that preceded 's theory. We'll explore the observations that led to propose his theory and look at the details of how evolution by natural selection occurs. Then we'll introduce some of the types of evidence that can be used to support Darwin's theory. 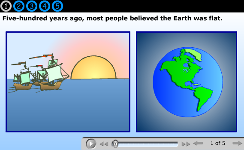 You will need Macromedia Flash Player to view this lesson.