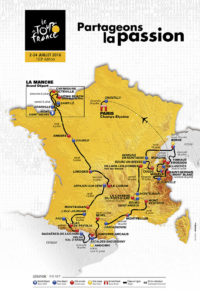 Close to 200 elite cyclists from around the world are pedaling almost 2,000 miles around France this month in the world’s biggest and most revered cycling race, the Tour de France. Nine riders on each of 20 professional teams are riding 21 stages over 23 days, culminating in perhaps one of the most awesome finishes on the planet when the final stage circles the Champs Elysees in Paris and ends at the Arc de Triomphe.

The Tour presents a great opportunity to use cycling to teach all sorts of things – math, culture, food, science, foreign languages  – even colors, as the overall leader wears a yellow race jersey, and others wear jerseys color coded to their area of specialty — to kids at every level.

And for the Grown-Ups

Check out more resources on Curriki’s website. And then, get outside and go for a bike ride!